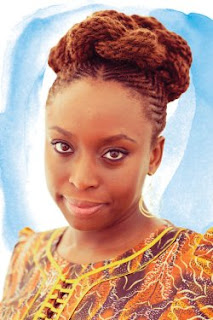 That makes Americanah a new kind of migration story, one that reflects a political shift and suggests a literary one. It’s one of the better novels I’ve read about life in contemporary America, but I’m not tempted to call it a Great American Novel. Instead, it strikes me as an early, imperfect, admirable stab at something new: a Great Global Novel. Ifemelu was well on her way to becoming an American—that promise dangled before, and coveted by, so much of the world for so long. She chooses, instead, to become an Americanah: an identity predicated on experience rather than nationality, trajectory rather than place. It’s an open question whether identities like that will change the world for the better. But, in Adichie, they have already done so for literature.

Posted by Chielozona Eze at 1:10 PM