Shuga: Gay Rights from the Ground Up 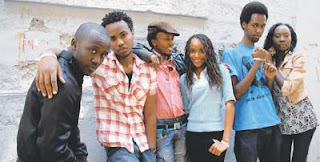 "While presidents and preachers bang their heads together over gay rights, Kenya's teen drama Shuga will hopefully advance respect from the grassroots up."

I like this development, the idea of grassroots education, the idea of young people engaging in profound education about tolerance and human rights.
ENJOY
Posted by Chielozona Eze at 1:15 AM No comments: 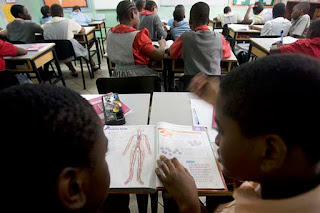 Two of Africa's contemporary writers, Petina Gappah and Chimamanda N. Adichie, have portraits of their native countries, Zimbabwe and Nigeria. Great writing, a study in contrast in styles and personalities. I have the feeling that these two writers, to the degree that they remain faithful to their temperaments, philosophies and creative outputs, will surely shape African writing in ways Achebe and Soyinka did.

Petina Gappah: "Zimbabwe:
"If Zimbabwe were human, the country would need more years of therapy than its 30 years of independence. According to Foreign Policy, in 2010, Zimbabwe was fourth on the “Failed State Index.” In 2006, it was declared to be the unhappiest place on earth—ahead of Zimbabwe on the “Happiness Index” were countries like the Democratic Republic of Congo, Sudan, and North Korea. In 2008, it had inflation rates not seen since the Weimar Republic: prices of goods changed as customers walked to the tills. By any measure, Zimbabweans should just have given up, switched off what little lights remained burning, and hightailed it to the nearest border.

Chimamanda Ngozi Adichie:"Why Are You Here?"
I came at the wrong time. It was mid-March 2011, a few weeks before general elections, and every surface in Lagos—compound walls, gates, even buses—was covered with political posters. “You came at injury time,” the senior teacher at the government junior high school told me. She was small and well-groomed, her blouse awash in ruffles. She looked me over suspiciously. “Why are you here?”
Posted by Chielozona Eze at 2:28 AM No comments:

SOMETIMES THERE IS A VOID: Memoirs of an Outsider 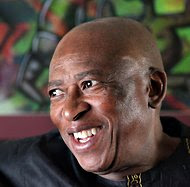 Having spent copious time with my mother, in my village, and having survived the chaos of Nigerian life (oil subsidy removal and all other idiocies), I'm happy be back to my workplace in the West. I loved being with my people; I didn't like the pain and misery they still go through. Well, I'm happy to report on some of the intellectual things going on in the African world. Here is a review of Zakes Mda's memoir, "SOMETIMES THERE IS A VOID: Memoirs of an Outsider," by Rob Nixon:

A sample:
"The lesson he learns has ramifications that carry well beyond his personal story: how easy it is for a successful, mid-career artist to lapse into the role of professional opinion maker and cosmopolitan partygoer. In the end, Mda resists the fatal temptations of the limelight. Tiring of the deadening dishonesties that pollute official discourse among A.N.C. apparatchiks, he realizes that creativity and probity are less in demand than sycophancy. And so he trades hectic Johannesburg for American academia, where he can better sustain the anonymity and inventive autonomy that feed his talent."
ENJOY
Posted by Chielozona Eze at 2:07 AM No comments: