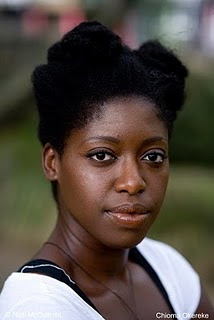 Nigeria keeps on producing enormous writing talents. As the American reading public is mesmerized by Teju Cole's debut novel, Open City, the rest of the Commonwealth is getting to know Nigeria's other talents. Here is a review of Chioma Okereke's debut, Bitter Leaf.

"Jericho, (who's female by the way), is a beautiful young woman. She's curious about the outside world so like many before her, she's taken the brave step of sampling life in a big, bustling city. She returns to her home village with some rather pretentious airs ... and a rich suitor in tow. By sheer coincidence Jericho's mother had attended an interview in her past at her daughter's new boyfriend's family home. A veritable mansion with ... sweeping rooms that took longer than a river to cross. What a lovely way of describing luxury in an essentially poor area of Africa. Everyone thinks the next natural step is marriage and babies but is it? "

I look forward to having my own copy.

ENJOY
Posted by Chielozona Eze at 9:09 AM