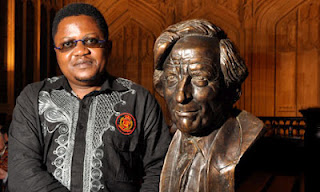 The "ambitious, darkly humorous" story of a Nigerian soldier fighting in Burma during the second world war has won Nigeria's Rotimi Babatunde the £10,000 Caine prize for African writing.

Babatunde, who beat authors from Kenya, Malawi, Zimbabwe and South Africa to win the prestigious award for a short story by an African writer published in English, tells of the experiences of Colour Sergeant Bombay in his winning piece Bombay's Republic. Chair of judges, the novelist and poet Bernadine Evaristo, praised his "vivid" descriptions. "It is ambitious, darkly humorous and in soaring, scorching prose exposes the exploitative nature of the colonial project and the psychology of independence," she said.

Congratulations, Rotimi.
ENJOY
Posted by Chielozona Eze at 1:48 AM