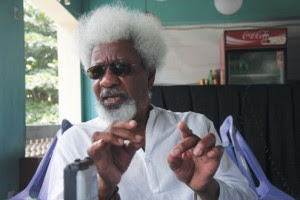 It is always enriching to read a piece of Wole Soyinka's mind.

"Let me begin by reminding everyone that Boko Haram has a very long history, whether you describe Boko Haram as an army of the discontent, or even as some people grotesquely try to suggest, “revolutionaries,” or you describe them as, legitimately, this time, as marginalised or feeling marginalised. When I say that the phenomenon has a very long history, I am talking about a movement that relies on religion as a fuel for their operation, as a fuel for mobilisation, as the impetus, an augmentation of any other legitimate or illegitimate grievance that they might have against society...."
ENJOY
Posted by Chielozona Eze at 12:55 AM