The man who rediscovered Africa 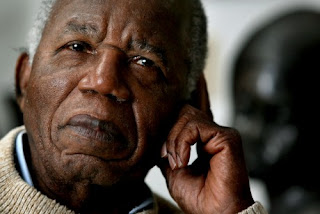 Some of us have read this already, but I think it's worth reading again. This is Chimamanda Ngozi Adichie paying tribute to her most important literary forebear, Chinua Achebe. I think that her ruminations form some basis for a kind of literary history.
A excerpt:

"All of Achebe’s work is, in some way, about strong communitarian values, the use of language as collective art, the central place of storytelling and the importance of symbolic acts and objects in keeping a community together. The American writer John Updike, after reading “Arrow of God,” wrote to Achebe to say that a western writer would not have allowed the destruction of a character as rich as Ezeulu. This is debatable, but perhaps what Updike had understood was that Achebe was as much concerned with a person as he was with a people, an idea well captured in the proverb that a character in Arrow of God recites: “An animal rubs its itching flank against a tree, but a man asks his kinsman to scratch him.”

ENJOY
Posted by Chielozona Eze at 11:38 AM