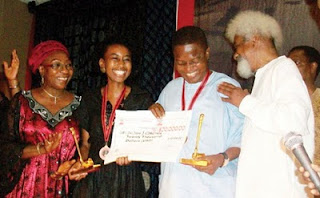 Confusion and dilettantism cast ugly shadows at Wole Soyinka Literature Prize. In one of my earlier posts, I pointed out that the exclusionary clause (Books that have won other awards are not eligible for this prize), which is part of the entry conditions, instantly makes the prize a laughing stock in the intellectual world.
But then the prize organizers seem to have broken their own rules when they included two books that have already won prizes in the shortlist. So, where do you stand, dear promoters of honesty and the intellect? Here's one of your entry conditions: Books that have won other awards are not eligible for this prize.
But then Nwaubani's book won the Commonwealth Best First Book Prize (Africa Region, announced 18 February 2010) and Matlwa's won the 2006/2007 European Union Literary Award.
Why am I so concerned about this? Wole Soyinka, to me, is a global icon of intellectual excellence, and to drag his name into an exercise that promotes mediocrity makes me sad. Another thing is that Lumina stands for light. I wonder how bright this light still shines when it is covered with this bushel of foggy information.
Here's an interesting article on the issue. Thanks to NEXT.
ENJOY!
Posted by Chielozona Eze at 8:14 AM